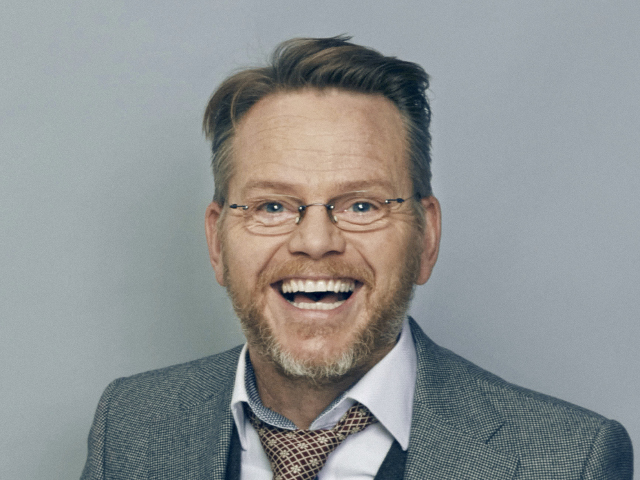 Gunnar Helgason was born in Reykjavík in 1965. Gunnar is a trained actor, he graduated from the Iceland Drama School in 1991 and has since worked as an actor, director and writer for stage and screen. Alongside Felix Bergsson, Gunnar took over the staple Icelandic kids' television program Stundin okkar (Our Time) during the years 1994-6. In the following years the duo wrote, performed and produced a wealth of dramatic and musical entertainment for children in various media. Gunnar managed the Lazy Town Live shows around the globe in 2008-10.

Gunnar's first children's book, Goggi og Grjóni (Goggi and Grjóni) was published in 1992. The sequel, Goggi og Grjóni: vel í sveit settir (Goggi and Grjóni: Farmed Out) followed in 1997. Since then, Gunnar has written several children's books, including the stories of footballer Jón Jónsson which started with Víti í Vestmannaeyjum (Penalty in Vestmannaeyjar, 2011). Gunnar received a special recognition from IBBY in Iceland for his contribution to children's culture, and received the Children's Literature Award three years in a row in 2013-2015. Gunnar was awarded the Icelandic Literature Prize in the category of children's and young adult literature for Mamma klikk! (Mom's Crazy!) in 2015.

I was born into a very fun family. My mother was the funniest mom in the building (Háaleitisbraut 18 – the stage for Goggi og Grjóni (Jack and Georg)) and even in the whole world. She always had us kids doing some fun stuff. She used to get together a bunch of kids to play games or sing songs. She played the guitar or the piano even if she said she couldn´t play any instruments. My Mommy was quite nuts!

I have a twin brother, Ásmundur (Ási) is his name, and two older siblings, Nina and Hallgrimur. I used to share bedroom with Nina (Ási was with Hallgrimur)until she got so hormonal that mom and dad decided she (and Hallgrimur) had to have her own bedroom. Also my Grandmother used to sleep in Nina´s bed when she lived with us so I shared a room with her too. I have no idea where Nina slept at that time.

My dad worked for the Road-administration, designing bridges and later on as the boss there. That meant a lot of travelling in the summers, a loooooot, and we had to stop at every single bridge so  my dad could look under it and check the state it was in. So we didn´t travel very fast but me and Ási developed a keen interest in throwing stuff into rivers. It started with stones and rocks but later on we threw fishing-flies. I´m addicted to fly-fishing. I have done two films about fly-fishing and two TV series along with my brother Ási. The third one will be aired in the spring of 2017 on RÚV.

The reason why I write children´s books is simple: When I was 8 years old I read the magnificent book: Jón Oddur og Jón Bjarni.  My world changed. This was a book about me and Ási. I wanted to write a book like that.

The reason why I write is also complicated: I grew up to the notion that the ultimate goal, the pinnacle, the ultra coolest thing in life was to be an artist. A painter or a writer was top nudge. I never intended to become one. In my mind artists were like magicians and I could just as likely become an artist as become Harry Potter. But then I grew up and now I feel I´m pretty good at writing and one should try and do what one is good in. So maybe I am a magician after all!?

On the other hand I wrote my first book in 8th grade. I was supposed to write a short story or an essay and I filled out en entire notebook with a story about immigrants in the USA and Indians and bad guys and all of that. My Icelandic teacher, Guðni was very pleased with the story and read the whole thing to the class. It took a week. A very difficult week for me but as he finished the reading Guðni said I should do more of this. Which I didn´t.

Until high-school. I met there another teacher who encouraged me. That was Brynjúlfur.  Actually, he gave me only 6,0 for a short story I wrote that was part of the final grade in Icelandic.  That sucked because I had also written stories for two of my classmates and they had gotten 8,5 and 9,0. I got another chance and wrote another story and got 8,5 for that one. I had intended to be so deep and complex in my first story that nobody understood it “even if the style of writing was pretty good” as Brynjúlfur put it.

I was quite bent (but not broken) after that whole experience but I got some wind in my sails a month later for on the final exam we were given a few topics to write a really short story about. I picked “crime and punishment” and wrote a children´s story. I got 9,5 and it was written in read on the paper that it should have gotten a clear 10 but it was impossible to give a story a perfect score.

So ... little by little I got it confirmed that I could actually write.

Right after graduating from Drama School I wrote Goggi og Grjóni (Jack and Georg). I worked the night-shift at an old peoples home – where my grandma was living – and after going my rounds and getting coffee and pancakes from grandma I sat down and wrote my first book with a pen. It got published two years later and was received kindly, both in sales and reviews.

Then I wrote the sequel a couple of years later but after that I started to get busy with acting career. I wrote Grýla but other than that I was busy acting and directing.

It wasn´t until 2008, when I started working as a Live Entertainment officer at Lazytown that I found my sweet spot. It was in making and producing children´s entertainment. So I decided to start writing again. I left Lazytown in 2010 and decided to write a book a year.

It has worked out just fine!

2017 – Special acknowledgement for his work on behalf of the Icelandic language. Awarded by the Icelandic Ministry of Education, Science and Culture

2015 - The Icelandic Choice Book Prize, in the category of children's or young adult books: Mamma klikk!

2013 - The IBBY recognition for his contribution to children's culture