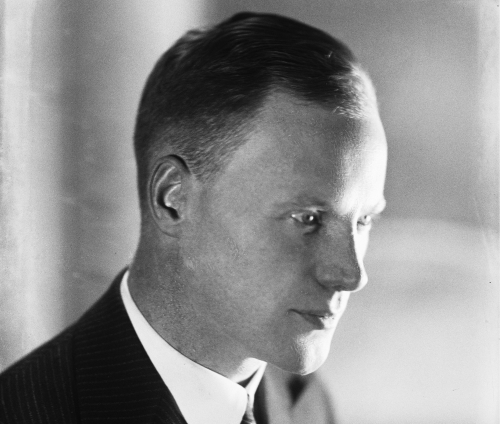 Please have a seat next to poet Tómas Gudmundsson's statue and listen to a reading of his poem "Hotel Earth", originally published in Icelandic in 1933 in his book Fagra veröld (Beautiful World).

Tómas Gudmundsson (1901-1983) is often referred to as the Reykjavik Poet and Reykjavik City's Poetry Award is named for him. Tómas wrote about this city in a way that had not been done before; he saw beauty in day-to-day life, in the urban bustle and cityscapes that had previously been depicted as bleak and dreadful in Icelandic literature. His poetry was accessible, which made it popular, as it still is today in fact.

You can listen to the same poem read in Icelandic on the Icelandic part of this website.